On Monday, May 11, 2020, pipeline and midstream giant Energy Transfer LP (ET) announced its first-quarter 2020 earnings results. At first glance, these results appeared to be rather disappointing as the company failed to meet the expectations of its analysts in terms of either top-line revenues or bottom-line earnings. The market was likewise disappointed as the stock traded down on the news. Admittedly, a closer look at the actual earnings report does indeed provide us with some reasons for disappointment as many measures of financial performance declined compared to the prior-year quarter although they were overall not that bad. In fact, these results show the strength of the company’s midstream model in the current environment.

One of the first things that anyone reviewing these highlights is likely to notice is that Energy Transfer saw its revenues decline compared to the equivalent quarter of last year. The biggest reason for this is energy prices. As anyone reading this is no doubt well aware, the market prices of both oil and natural gas fell precipitously after the novel coronavirus pandemic became widespread in March. At first glance, the fact that this would have an impact on the company’s revenues would seem to run counter to several earlier statements that I have made in the past about midstream companies being somewhat insulated from fluctuations in energy prices. However, one of the ways that these companies, including Energy Transfer, make money is through take-or-pay contracts. The way these work is that Energy Transfer purchases the resources at one location, transports them to their destination, and then sells them to its customer under contract. As both the buying and selling prices are based on energy prices, the company’s revenues will fluctuate somewhat with these. What really matters here is the difference between the two prices, known as segment EBITDA. As we can see here, the segment adjusted EBITDA was relatively flat year over year, with a few exceptions:

This is something that is quite nice to see in the current environment of coronavirus-driven low energy prices. Perhaps even more encouraging is the fact that the overwhelming majority of Energy Transfer’s revenues come from fee-based contracts and not from take-or-pay contracts: 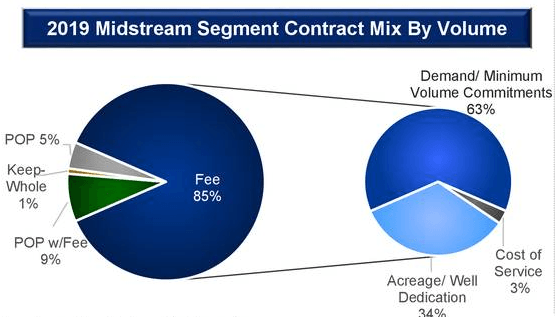 A fee-based contract does not require Energy Transfer to actually take title to the resources that it transports. Rather, it simply charges a fee to the customer for each unit of resources that moves through its infrastructure. This is an even safer way for the company to earn money since it is completely independent from energy prices.

With that said, any of these methods of earning money depends on the counterparty to the contract remaining solvent. As I have explained in a few recent articles, most notably this one, there is a very real risk that upstream companies in the oil shale could be at risk of bankruptcy if energy prices remain low for an extended period. Naturally, the long-term contract that Energy Transfer has with its customer would not mean very much if the customer is bankrupt. It is, therefore, fortunate that only a minority of the firm’s contracts are with upstream crude oil producers: 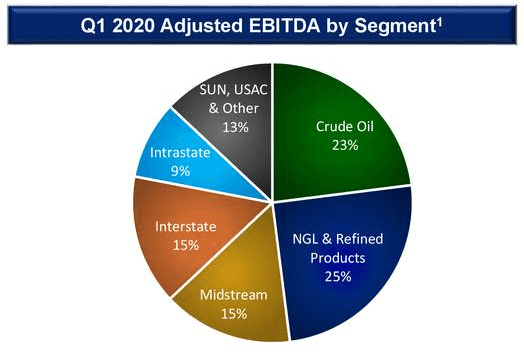 One of the reasons for this is that upstream crude oil companies are at greater risk of bankruptcy than natural gas producers, midstream companies, or utilities. We can still see that if all of its crude oil-producing customers were to go under, then Energy Transfer would see a significant hit to its bottom-line earnings and cash flows. It is unlikely that this would happen as many of its customers are large and well-capitalized companies that should be able to weather the current conditions plaguing the energy industry.

One of the promising things about Energy Transfer that I have discussed in past articles is its fairly ambitious growth program. The company was constructing a significant amount of new infrastructure to meet the needs of its customers that were planning to expand their own resource production. It continued to make progress on this in the first quarter. In January 2020, the Panther II natural gas processing plant in the Permian basin was brought online, which adds 200 million cubic feet per day to the company’s processing capacity in the region. In addition, the company brought its seventh fractionation unit into full service at the massive Mont Belvieu facility, bringing its capacity at that site to 900,000 barrels per day. Obviously, this new capacity should serve to expand the company’s cash flow as it becomes utilized.

In response to low energy prices, the nation’s upstream producers have already cut their planned capital spending plans by more than $17 billion with more cuts inevitably to come. This will obviously slow production growth from even what the companies were expecting as recently as February. As a result, there is no longer the need for some of the growth projects that Energy Transfer has been working on. As has been the case with many other midstream companies, it has opted to reduce its own planned capital spending by delaying or cancelling some of its projects: 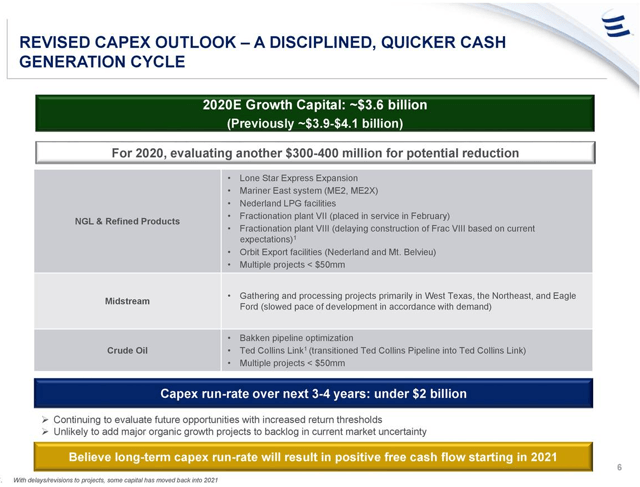 As we can see, Energy Transfer has cut its planned capital spending in 2020 by $300 to $400 million and it may increase these planned cuts by more should the current conditions get worse. While this will stunt the company’s growth compared to what we originally expected, this should prove to be a smart move as it makes no sense for the company to continue to expend cash to construct them and then to maintain them if it will no longer generate a positive cash flow off of them. Presumably, the company will resume work on them when it makes financial sense to do so, thus it is only delaying and not ending its growth story.

Fortunately, Energy Transfer has not completely abandoned its growth story. As we can see here, the company continues to have a number of projects that are scheduled to come online between now and 2022: 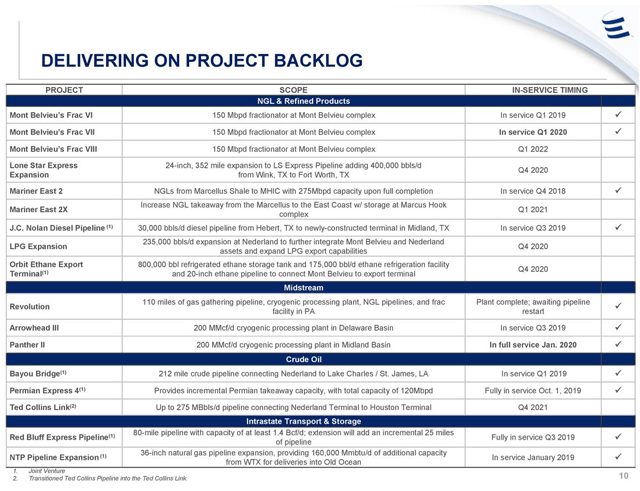 This will naturally have the impact of continuing to drive the company’s growth going forward despite the recent spending cuts. As is always the case, the company has already secured contracts for the use of this new infrastructure. This is nice because as already discussed, it makes no sense to spend the money to construct infrastructure that nobody wants to use. The presence of the contracts also effectively guarantees that the company will generate a positive return on its investment (or at least as close to a guarantee that we can get in this business).

In conclusion, this was a reasonably solid quarter for Energy Transfer that certainly shows the strength of the company’s midstream model even in challenging economic conditions like what we see today. Overall, it saw its cash flows hold up reasonably well and it continues to generate more than enough cash flows to cover its distribution. This is something that any investor should appreciate.

At Energy Profits in Dividends, we seek to generate a 7%+ income yield by investing in a portfolio of energy stocks while minimizing our risk of principal loss. By subscribing, you will get access to our best ideas earlier than they are released to the general public (and many of them are not released at all) as well as far more in-depth research than we make available to everybody. We are currently offering a two-week free trial for the service, so check us out!