Earlier this month, I made the argument that the euro may start meeting resistance against the greenback going forward.

The primary reason for this is that COVID-19 cases were showing signs of a resurgence in Europe. While the EUR/USD had seen growth as cases started to flatline over the summer months, a spike in cases is now leading to a significant decline in the currency:

That said, I was somewhat more optimistic that the EUR/USD might continue to oscillate at the 1.20 level and potentially see further growth. The reason for this was that in spite of the recent rise in cases, Europe has been effective at containing the outbreak up till now and previous structural concerns regarding the European Union such as a potential Italexit have largely been quelled as a result of a broad package of financial assistance by the ECB.

However, COVID-19 fears and the growing possibility of further lockdowns across Europe appear to be causing a shift in risk sentiment and we have seen a broad decline by several currencies against the U.S. dollar over the past couple of days. 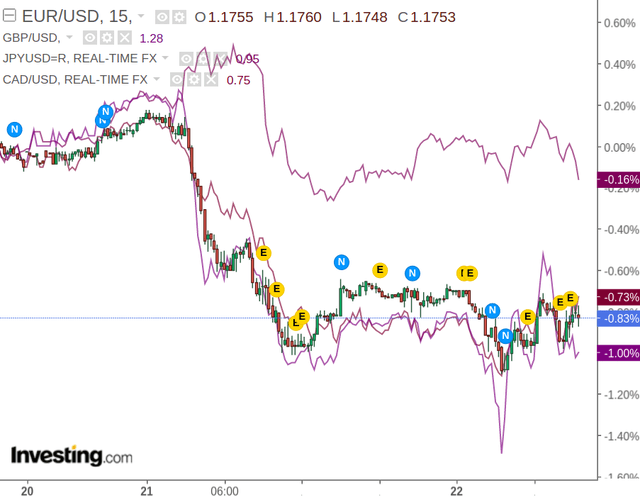 I anticipate that this trend could continue and we could see a rebound in the U.S. dollar after months of decline.

Moreover, Federal Reserve chief Jerome Powell has announced that economic aid will continue for “as long as it takes” in order to bolster the economic recovery going forward. Specifically, interest rates will not be raised until inflation levels rise above the 2% target once again.

Markets appear to have reacted favourably to this news. While extended low rates might be a cause for concern in stronger economic times and lead to a weaker currency, the markets appear to recognise that bolstering economic growth is a priority at this point in time; and thus, we are seeing the dollar assume “safe haven” status once again.

Additionally, while the ECB has been successful in delivering monetary aid to European countries to fight the effects of the pandemic, the extent to which they will be able to do so going forward is questionable. The stimulus programme met with resistance at its outset, and countries such as Germany may seek further legal challenges to determine whether such funding still meets the criteria of “proportionality.”

There is a fear among many in Europe that the PEPP programme could become an extended form of stimulus rather than a one-time package designed to explicitly deal with the COVID-19 pandemic. As mentioned, extensions of the program are likely to be met with resistance from the German side, with Bundesbank President Jens Weidmann arguing that fiscal measures must be scaled back after the crisis, and interest rates should not stay where they are any longer than necessary to fight the economic downturn caused by the pandemic.

From this standpoint, a “second wave” of COVID-19, coupled with potentially less scope to extend emergency stimulus measures in Europe, could see a significant weakening of the EUR/USD.

In this context, I take a more bearish view on the EUR/USD than previously. The currency had originally strengthened on the basis that COVID-19 cases were flatlining in Europe. However, this no longer appears to be the case and the U.S. dollar is now strengthening once again as safe-haven demand starts to rise.