CoStar (CSGP) stock has outperformed YTD, but I think this rally still has legs. Yes, the multiple is high, but there’s ample growth potential and visibility to boot – the company derives the vast majority of its revenue from subscription-based services and has sustained exceedingly high renewal rates over the years. Plus, CSGP is tackling a massive TAM (digitizing the real estate industry). Growth, margin expansion, and high cash conversions are a good combination in any investment, and I believe CSGP has them in spades. Relative to the FY23 targets, which seem very much within reach, the risk/reward strikes me as favorable here.

I was positively surprised to see CSGP’s net new bookings improving to ~$53m in 3Q (up from ~$35m in 2Q), with broad gains across segments and a steady monthly cadence of new sales signaling the return of its pre-COVID momentum. I’d single out the multifamily performance on Apartments.com as a key area to watch for – per management, net new sales here were up a record 59% YoY, with an extensive secular growth runway ahead as more transactions move online over the long-term.

“Our sales team at Apartments.com turned in one of their best performances ever in the third quarter, with net new sales up a massive 59% versus the same quarter a year ago. Customers continue to invest in Apartments.com because of the strong and growing lead flow we delivered, driven by growing site traffic and engagement. During the quarter, we set yet another record for site traffic.” – 3Q20 Transcript

Contrary to the skeptics, I don’t think the bookings ramp was all catch-up – in fact, I think CSGP will see continued acceleration into 4Q as well. Even beyond 4Q, I believe demand for CoStar products will remain high on COVID-driven vacancies in apartments and commercial spaces. With the economics (i.e., advertising cost on CSGP’s platform vs. months of lost revenue) overwhelmingly in favor of CSGP as well, I think the online Marketplace has ample growth potential ahead.

CSGP’s 3Q20 performance validated much of my bullishness, with growth, margin expansion, and an >100% cash conversion on display. Revenues came in at $426m, above consensus estimates and up 20.6% YoY, though organic growth (adjusted for STR and Ten-X) was closer to ~13.6% YoY – still, an acceleration from the last Q. ~79% of the revenue comes from subscriptions (+16% YoY), while ad hoc revenue was up ~41% YoY, helped by the Ten-X contribution. The 12-month renewal rate also held firm at 89% in 3Q, highlighting the stickiness of CSGP’s revenue stream.

The gross margin also came in strongly at 81.7% (+190bps YoY) as the overall mix increasingly shifts toward marketplace revenue (from information & analytics). That said, EBITDA margins did contract ~530 bps YoY to 31.4% due to higher marketing spend, with fully-diluted non-GAAP EPS of $2.26 also down YoY, but still above the high-end of the prior outlook. 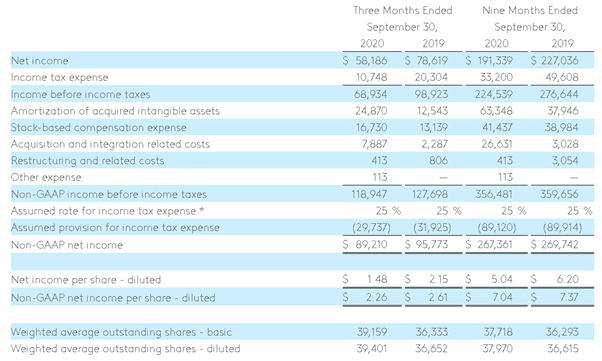 CoStar Suite Set for an Acceleration

With management opting to create a dedicated sales force for LoopNet going forward, the previously shared sales force can now re-focus on selling CoStar Suite. A Costar Suite sales force and product initiatives in the pipeline should underpin a return to double-digit organic revenue growth by FY21, in my view. I wouldn’t rule out an acceleration in the following years either – the platform’s new product enhancements (e.g., CMBS data, STR’s properties, and hospitality analytical tools) are promising and could enhance CSGP’s platform monetization efforts. Also in the works is an internationalized version of the CoStar Suite in FY21, which will allow CSGP to tap into a massive international opportunity (sized at ~2-3x that of the US).

The full-year outlook moves up post-3Q, with a ~$12m increase in expected revenue to the $1,644-$1,650m range and an ~$8m increase to the EBITDA guide. Note that the outlook for EBITDA incorporates added marketing spend in LoopNet and Ten-X, hence the relatively lower guidance raise. That said, it’s important to view the updated numbers in context – the latest revision brings EBITDA of $525-$530m in-line with pre-COVID assumptions. The EPS outlook was also raised to $9.39-$9.49 (from $9.22-$9.42), but still implies an 8.5% YoY decline.

Given CSGP’s reliance on inorganic growth, the strong balance sheet is a very good thing. With ~$3.9bn in cash on hand and ~1x in gross financial leverage, CSGP is well-positioned for additional M&A to support >20% annual revenue growth going forward.

And if recent press reports are to be believed, CoStar’s next target could be CoreLogic (CLGX). If potential offers reach the $80-90/share range reported, this would imply a reasonable 13.5-15x fwd EV/EBITDA (ex-synergies) transaction multiple. I think there’s a good chance CSGP moves forward with an acquisition at that price and if the synergies run anywhere near prior deals (~25% of target company revenue for LoopNet and Apartments.com). Relative to CLGX’s FY19 revenues, this would imply ~$400m in synergies, which would likely result in an accretive outcome regardless of the debt/equity mix.

On Track for FY23 Targets and a Lot of Upside

Central to the Costar investment case is its ability to hit its FY23 targets – that’s ~$3bn of revenue (at a >20% revenue CAGR) and 40% EBITDA margins, which likely drives >$20 in EPS. Given the sustained strength across Marketplace (>20% YoY growth) and Info & Analytics (low to mid-teens % growth), as well as the margin-accretive shift toward Marketplace, I see ample runway for CSGP to hit (and perhaps exceed) its medium-term targets, driving a path toward >$1,000/share.

Relative to a >$20 EPS outcome and >20% YoY EPS growth, the stock does not screen all that expensively either on its fwd PEG. Plus, the company’s cash-rich balance sheet and successful M&A track record entail optionality, which could further boost the growth outlook. On balance, I am quite comfortable underwriting an investment in CSGP at the current price.

Final word on risks – the key downside risk I see is on the macro front, where above-trend commercial real estate delinquencies could drive below par subscription renewal rates. While management currently sees a modest headwind of ~100bps (in-line with how things have panned out thus far), a worsening macro could move renewals closer to the ~800bps headwind seen during the 2008 crisis (implying an ~82% 12-month renewal rate vs the 90% pre-COVID). Additionally, M&A integration is also a risk to margins as below par synergy realization or aggressive investments in go-to-market and branding would weigh on the earnings power and visibility.