USD/CAD approaches the yearly low (1.2928) ahead of Canada’s Gross Domestic Product (GDP) report, and the update may keep the exchange rate under pressure as the Canadian economy is expected to avoid a technical recession.

USD/CAD gives back the rebound from earlier this month as it fails to retain the range bound price action from the previous week, and fresh data prints coming out of Canada may drag on the exchange rate as the growth rate is expected to increase 47.6% in the third quarter of 2020 after contracting 38.7% during the previous period.

A sharp rebound in economic activity may spark a bullish reaction in the Canadian Dollar as the Bank of Canada (BoC) adjusts its quantitative easing (QE) program ahead of 2021, with the central bank announcing that “total purchases will be gradually reduced to at least $4 billion a week” at its most recent in October.

However, BoC Governor Tiff Macklem insists that the policy shift is “increasing the stimulative impact of our QE program per dollar purchased, allowing us to reduce our total minimum weekly purchases to $4 billion, while still providing at least as much monetary stimulus,” with the central bank head going onto say that “the focus of our bond purchases has shifted squarely to providing the monetary stimulus required to support the recovery and get inflation back to its target” while testifying in front of the House of Commons Standing Committee on Finance.

As a result, Governor Macklem states that the “QE program will continue until the recovery is well underway,” and it seems as though the BoC will continue to endorse a dovish forward guidance at its last meeting for 2020 as “the economy has entered in the slower-growth recuperation phase.”

In turn, key market trends may continue to influence USD/CAD ahead of the BoC interest rate decision on December 9 as the US Dollar broadly reflects an inverse relationship with investor confidence, while the tilt in retail sentiment looks poised to persist throughout the remainder of the year as traders have been net-long the pair since mid-May. 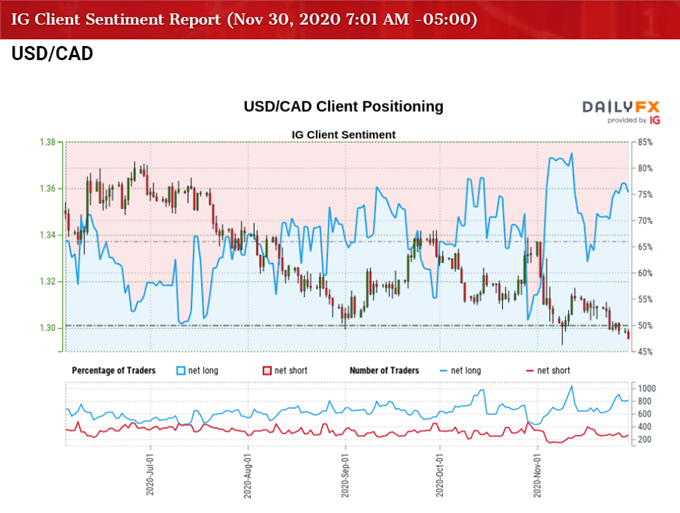 The rise in net-short position comes as USD/CAD trades to a fresh monthly low (1.2931), while the rise in net-long position suggests the crowding behavior will persist over the coming days as 72.26% of traders were net-long the pair last week.

With that said, swings in risk appetite may influence USD/CADahead of Canada’s GDP report as US Dollar broadly reflects an inverse relationship with investor confidence, but the update may keep the exchange rate under pressure as a sharp rebound in economic activity undermines speculation for additional monetary support.