G10 currencies added to the Swiss Franc’s 2021 misery during trade on Tuesday, with notable breakouts occurring across multiple CHF pairs. USD/CHF climbed just above 0.9050 at its peak, despite mixed sentiment surrounding the Greenback. Testimony from Federal Reserve Chair Jerome Powell invited pressure back on the Dollar, as Powell remained accommodative and called for continued fiscal support.

Moving forward, the 20-day MA may provide key pivot levels for USD/CHF. Broad post-Brexit strength in the Sterling elevated GBP/CHF above 1.27 for the first time since February 2020. 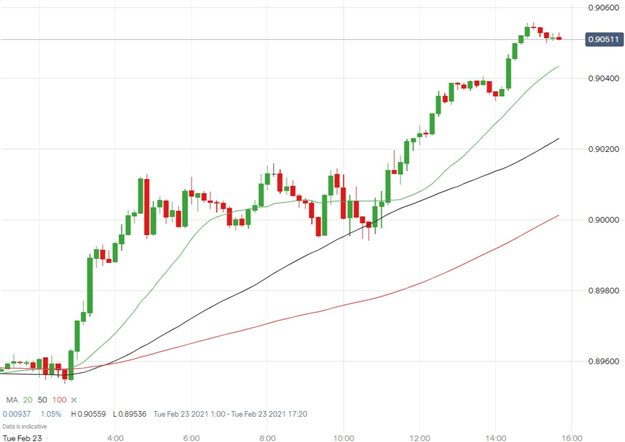 Despite EUR weakness elsewhere, the Euro hit its highest level against the Swiss Franc since November 2019. The Relative Strength Index for EUR/CHF sits at 91.5, indicating severely overbought conditions. Prior to this week’s breakout, EUR/CHF had bullish momentum pointing to a potential move higher.

Get Your Free EUR Forecast

The pair’s MACD line crossed above its signal line, indicating a potential entry point for EUR/CHF longs. This breakout positions EUR/CHF 0.91% above the 20 DMA and 1.57% above the 100 DMA. A mere 50% retracement of this move would position the pair at 1.0860, well within the range established throughout the New Year period. That said, there is little to suggest such a reversal will materialize. For more on CHF, check out Thomas Westwater’s CHF Technical Forecast here. 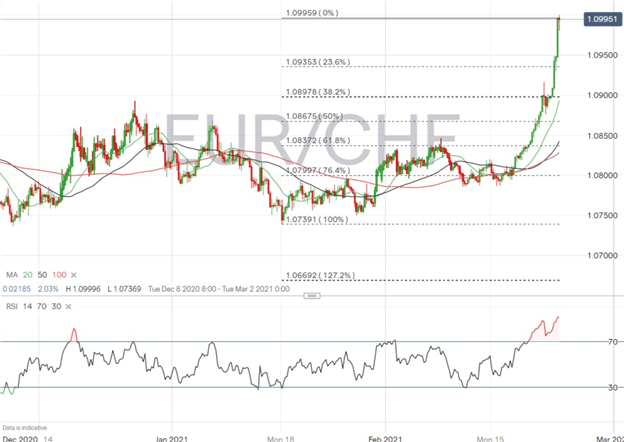 While the recent surge against the Swiss Franc is significant, perspective remains key. The breakout to .905 brings the Franc back to a post-pandemic range against the Dollar where the pair gyrated for months. For context, the post-pandemic high for USD/CHF is 0.9901. 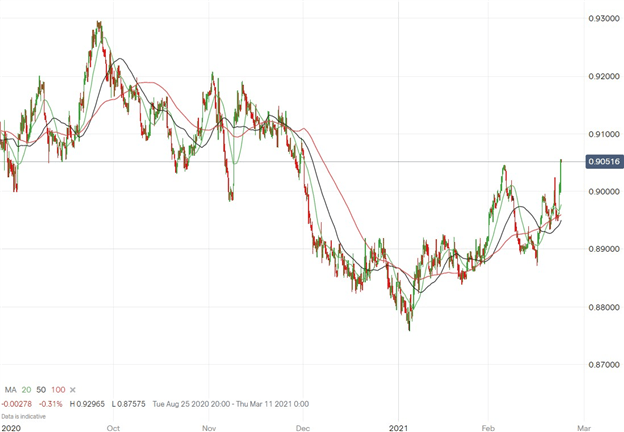 All charts provided courtesy of IG.

This breakout simply reestablishes a presence at the bottom end of the range the pair traded in throughout 2020. Continued strong economic prints from the US may also extend the pair beyond its current levels, as the United States appears set to experience an unprecedented economic rebound.