RBNZ RECOGNISES STRONG ECONOMY: As widely expected, the RBNZ stood pat on current monetary policy with the OCR and LSAPs left unchanged. The overall message by the RBNZ was not entirely surprising with the central bank recognising the recent run of stronger than expected domestic data. Keep in mind that the last meeting was back in November, where the global economy has changed notably since then with markets much more resilient thanks to the rollout of vaccinations.

RBNZ ON NEGATIVE OCR: The RBNZ noted that operational work to enable the OCR to be taken negative if required has now been complete. However, Governor Orr stressed that while the policy is in the toolbox, this does not mean the central bank will necessarily go down this route, given that they see risks as broadly balanced for now. The RBNZ had also lifted their projection on the unconstrained OCR outlook vs the November MPS.

RBNZ ON NZD: A risk factor going into the meeting had been the possibility of the RBNZ jawboning the currency, given how much the Kiwi on a trade weighted basis had overshot the central bank’s estimate. That said, while the central bank made a mention of the exchange rate, stating that “gains from higher export commodity prices have been somewhat offset by the stronger New Zealand Dollar”, thus, with the commodity super cycle in full swing, the Kiwi does not pose a notable concern for the RBNZ at present.

AUD/NZD | Is the Divergence Back?

As we highlighted last week, the preferred trade for the RBNZ decision had been to fade the AUD/NZD strength with the RBNZ unlikely to match the dovishness of the RBA. An interesting point made by Governor Orr was that the QE program of NZD 100bln is a limit and not a target and thus, going forward, focus may begin to shift towards a tapering debate in QE purchases, particularly as government issuance is expected to drop. In reaction to the decision, AUD/NZD has come under pressure with the 200DMA and 50DMA tested. AU/NZ spreads points to lower levels for the cross, with a close below 1.07 key for a move towards 1.0670 and 1.0640 below. 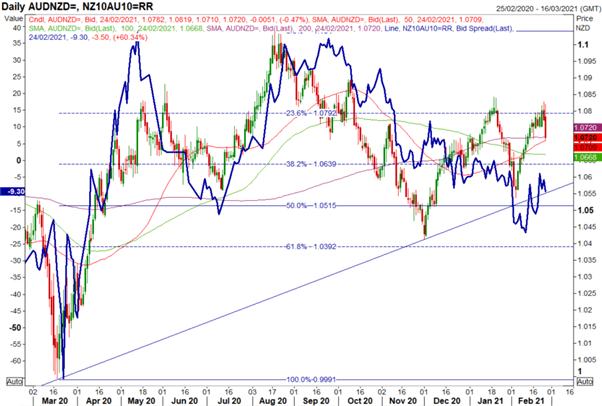