US Treasury yields continued to rise throughout the week, coalescing in Thursday’s highly volatile session. After beginning the day at around 1.4%, the US 10y Treasury spiked as high as 1.6%, crossing the 1.5% estimated dividend yield of the S&P 500 and spooking investors. The S&P 500 fell by 2.5%, the Dow Jones by 1.8%, and the Nasdaq by 3.5%, its sharpest single day decline since October. As investors shied away from tech stocks, the Nasdaq-based QQQ ETF saw its largest outflow since late January.

Get Your Free Gold Forecast

The rise in Treasury bond yields translates to a rise in real rates, putting heavy pressure on non-yielding assets like precious metals. Gold had been on a downtrend since August as Treasury yields continued to edge higher and broke through support Friday, falling to its lowest level since the June of 2020, shortly before the run up to $2,000 began. 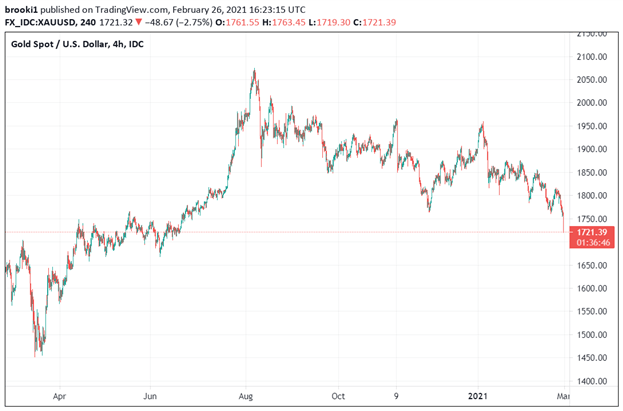 The retreat from bullish sentiment in gold has driven outflows from the GLD ETF. While GLD saw large inflows throughout the first half of 2020, the exhaustion in the gold rally over the summer flipped flows towards net negative. Large outflows beginning in November and December have continued in 2021, and gold’s recent price action suggests that outflows will continue. 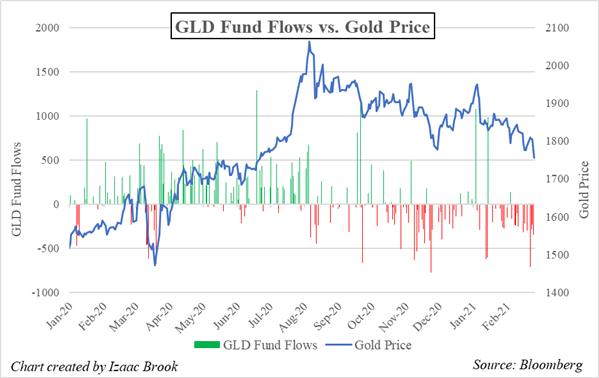 While gold has struggled amidst a rising rates environment, other interest rate sensitive sectors have boomed. With higher interest rates comes higher profitability for the financial sector. The SPDR Financial Sector ETF (XLF) has seen net inflows of over $7 billion in 2021, especially over the past week as rates have marched higher. The ETF climbed above its pre-pandemic highs in early January and rose to a new fresh high earlier this week. 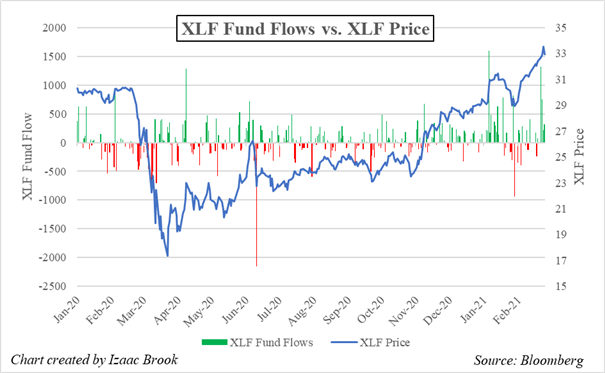 While the movements in yields have had a large impact on markets in recent weeks, these moves have mostly been confined to the longer end of the curve. 2Y and 5Y Treasury yields have edged slightly higher this week, but their moves are nowhere near those seen in the 10Y and 30Y. 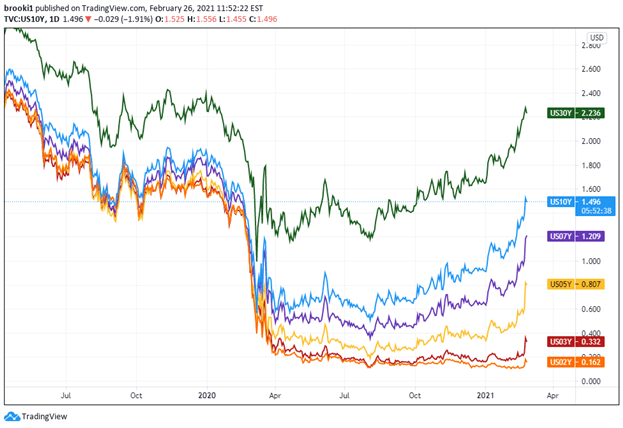 FOMC officials have welcomed the rise in longer-term yields, suggesting that such moves reflect increasing optimism about the economy recovery and stating that no policy response is required. However, it is possible that the moves can only be tolerated for so long before they begin to threaten the recovery. Next month’s FOMC meeting may see officials debating whether to extend the weighted average maturity of their bond purchase program.