NZD/USD trades to a fresh yearly high (0.7411) as the Reserve Bank of New Zealand (RBNZ) retains the current course for monetary policy at its first meeting for 2021, and looming developments in the Relative Strength Index (RSI) may indicate a further appreciation in the exchange rate if the oscillator pushes into overbought territory.

NZD/USD appears to be on track to test the 2018 high (0.7437) as the RBNZ holds the official cash rate (OCR) at the record low of 0.25%, and the rebound off of the 50-Day SMA (0.7189) may continue to gather pace as “the Committee agreed that the risks to the economic outlook are balanced, in large part due to the anticipated prolonged period of monetary stimulus.”

It seems as though the RBNZ is in no rush to deploy more unconventional tools even though “the banking system is operationally ready for negative interest rates” as Governor Adrian Orr and Co. insist that “that current monetary policy settings were appropriate to achieve its inflation and employment remit.”

The comments suggest the RBNZ will continue to endorse a wait-and-see approach its next meeting on April 14 as the central bank keeps the “Large Scale Asset Purchase (LSAP) Programme of up to $100 billion and the Funding for Lending Programme (FLP) operation unchanged,” and it remains to be seen if the central bank will alter the forward guidance in 2021 as “the Committee agreed that it was important to be confident about the sustainability of an economic recovery before reducing monetary stimulus.”

Until then, the New Zealand Dollar may continue to outperform its US counterpart as Federal Reserve Chairman Jerome Powell endorses a dovish forward guidance in front of US lawmakers, but the tilt in retail sentiment looks poised to persist as traders have been net-short NZD/USD since October. 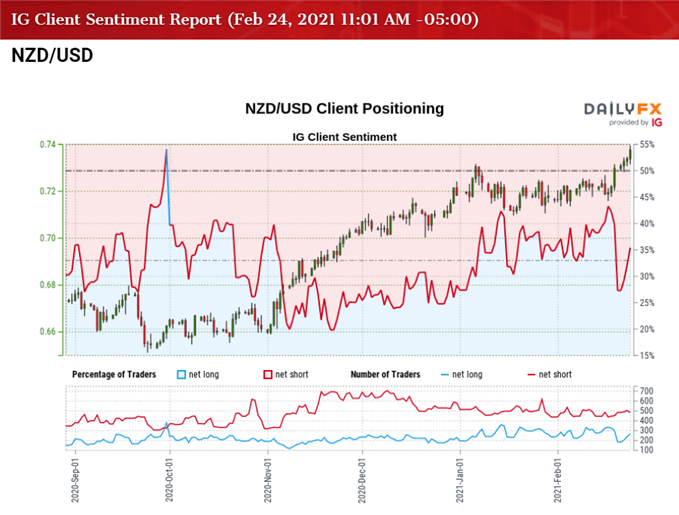 The IG Client Sentiment report shows 32.66% of traders are currently net-long NZD/USD, with the ratio of traders short to long standing at 2.06 to 1.

The number of traders net-long is 9.96% lower than yesterday and 30.25% lower from last week, while the number of traders net-short is 6.80% lower than yesterday and 3.56% higher from last week. The drop in net-long interest could be a function of profit-taking behavior as NZD/USD trades to a fresh yearly high (0.7394), while the decline in net-short interest has helped to alleviate the tilt in retail sentiment as 32.01% of traders were net-long the pair ahead of the RBNZ meeting.

With that said, the commodity bloc currencies may continue to appreciate against the US Dollar as the recent decline in NZD/USD appears to be have been an exhaustion in the broader trend rather than a change in market behavior, and looming developments in the Relative Strength Index (RSI) may indicate a further appreciation in the exchange rate if the oscillator pushes into overbought territory.