NBS manufacturing PMI for last month came in at 50.6 (exp. 51.1), while non-manufacturing PMI slide to 51.4 (exp 52). This seemed to have little effect on the trade-sensitive currency, as it surged over 0.6% higher against the US Dollar, on the back of expectations that the Federal Reserve may look to do more in the wake of the recent sell-off in US Treasury markets.

The upcoming Reserve Bank of Australia’s interest rate decision will be keenly eyed by local investors, as the central bank fiercely attempts to defend its 3-year yield target against the global reflation trade that has routed bond markets.

After a two-month hiatus from the local debt market, the RBA was forced to purchase over $7 billion in bonds last week, to prevent 3-year yields from accelerating further away from the central bank’s 0.1% target. Yields on 3-year government bonds climbed as high as 0.149% on February 25, and still remain just over 3-basis points higher than the RBA’s target. 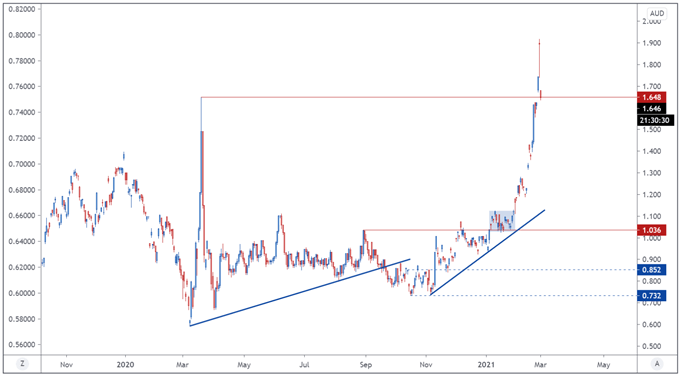 But it isn’t just short-term maturities that are causing the central bank headaches, with an almighty sell-off in 10-year government bonds sending rates of return soaring just shy of 80-basis points. Indeed, the RBA announced $4 billion of purchases in longer-date securities – double its normal size – to cap the marked rise in yields on Monday.

One would expect that this would signal further downside for the local currency however, with the strong possibility that the Federal Reserve will follow suit in the coming weeks, it seems relatively unlikely that AUD’s long-term bullish trajectory is at risk.

Moreover, with commodity prices continuing to surge higher, and recent fundamental data points pointing to a rapid recovery in economic output, the path of least resistance for the risk-sensitive Australian Dollar remains skewed to the topside. 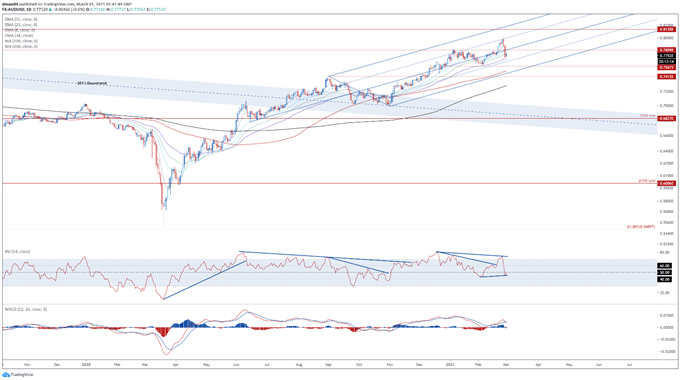 From a technical perspective, the outlook for AUD/USD remains constructive, as prices continue to track within the confines of an ascending Andrews’ Pitchfork and accelerate away from trend-defining support at the 55-EMA (0.7674).

With the RSI maintaining the uptrend extending from the September lows, and the MACD tracking firmly above its neutral midpoint, further gains appear in the offing.

Ultimately, a daily close above confluent resistance at 0.7800 and the Pitchfork median line is needed to carve a path for price to retest the yearly high (0.8007). Clearing that probably signals the resumption of the primary uptrend and brings the 2018 high (0.8136) into the crosshairs.

Alternatively, falling back below psychological support at 0.7700 could trigger a more extended pullback to the February low (0.7564) 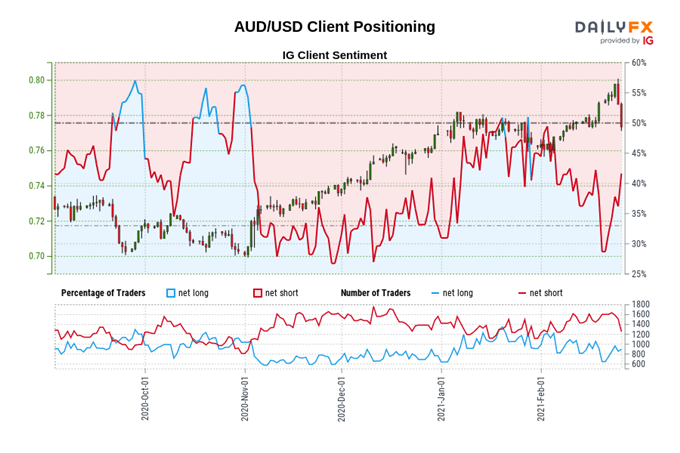 We typically take a contrarian view to crowd sentiment, and the fact traders are net-long suggests AUD/USD prices may continue to fall.

Traders are further net-long than yesterday and last week, and the combination of current sentiment and recent changes gives us a stronger AUD/USD-bearish contrarian trading bias.