US stock markets started off the week on a solid footing as Treasures caught a bid, pushing yields lower across the curve. Technology companies were the biggest beneficiaries, with the Nasdaq 100 rising a healthy 1.71% on the day. The S&P 500 and Dow Jones Industrial Average (DJIA) also saw inflows, closing 0.70% and 0.32% higher, respectively.

Elsewhere, gold and silver prices fell against a strengthening Greenback. The US Dollar’s move higher was an extension from Friday when the Federal Reserve announced its decision not to extend the Supplementary Leverage Ratio (SLR). The regulatory measure was initially intended to ease stress on the Treasury market. However, the Fed’s statement noted that stress has since eased. Even so, further action may be necessary according to the Federal Reserve, with the central bank stating:

“Since that time, the Treasury market has stabilized. However, because of recent growth in the supply of central bank reserves and the issuance of Treasury securities, the Board may need to address the current design and calibration of the SLR over time to prevent strains from developing that could both constrain economic growth and undermine financial stability.”

The SLR issue may be brought up at this week’s congressional hearing when Chair Powell and Treasury Secretary Janet Yellen will appear and speak together for the first time since Ms. Yellen took the helm at the Treasury Department. Regardless, traders and investors will continue to monitor any updates on further changes to the SLR. 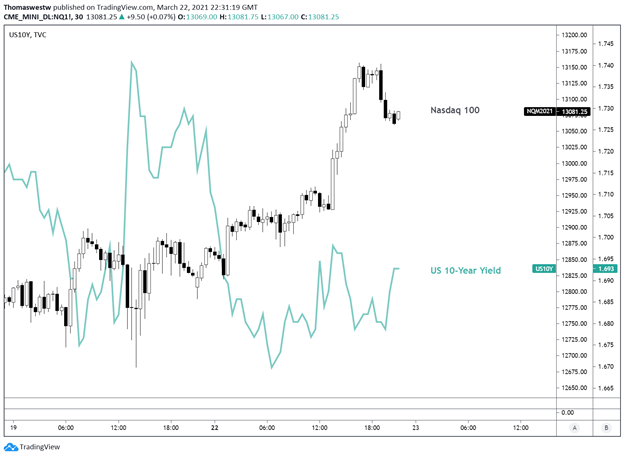 Learn how to become a more consistent forex trader

Elsewhere, Japan’s Nikkei 225 suffered a deep loss after a major fire at an automobile computer chip manufacturer sent a shockwave through Japanese auto stocks, sinking the index over 2% on the news. The factory, located in Hitachinaka Japan, was scorched so severely that the company reported it will take weeks or more to get production online.

Economic events are rather sparse for today, with the DailyFX Economic Calendar showing no high-impact risk on the docket. This will likely leave markets subject to broader risk trends. That said, the likely underperformer today may be the Nikkei as traders continue to price in effects from the chip-plant fire. However, Singapore will release inflation data, and Taiwan will see retail sales and industrial production prints cross the wires.

The New Zealand Dollar is taking a hit on news that the island nation’s government will take measures to reduce tax-based incentives aimed at reducing speculation in the housing market. The sharp rise in home prices since the Covid pandemic has injected fears over an impending housing bubble.

Specifically, the move will phase out investors’ ability to claim a deduction on mortgage interest expenses. The news was first reported by Bloomberg. Local longer-term government bond yields weakened on the announcement as such measures would likely ease some pressure off the RBNZ to take action down the road, driving the New Zealand Dollar lower.

The risk-sensitive New Zealand Dollar was nearly unchanged on Monday against the USD, falling only 0.09% after gyrating between gains and losses over the past 24 hours. Now, the Kiwi appears set to extend its drop against the Greenback, with NZD/USD’s 20-day Simple Moving Average (SMA) aiming for a cross below its 50-day SMA, a bearish technical signal. 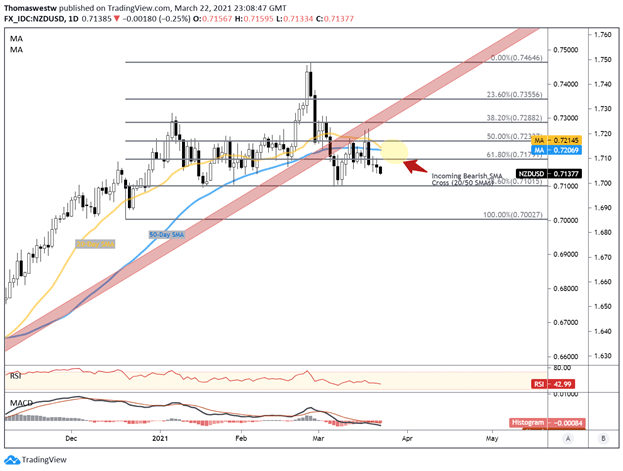