Australia is experiencing a robust recovery from the COVID-induced recession. Business and consumer confidence metrics continue to shine while wages grow and employment data rebounds. Given the swift recovery, the RBA has maintained its monetary policy stance, stating that the “economic recovery is well underway, stronger than had been expected.”

AUD/USD has been battling a mix of headwinds and tailwinds recently as outperformance has ground to a halt. Additional lockdowns in Australia coupled with a slower than expected rollout of COVID vaccines may potentially cap AUD gains in the near term, despite an improving economy. However, should AUD/USD break beyond a significant resistance level at 0.7800, a run back towards 0.8000 may be on the cards. Any headwinds for the Australian Dollar may see the currency fall back and test its 50-day EMA, which currently sits at 0.7676. 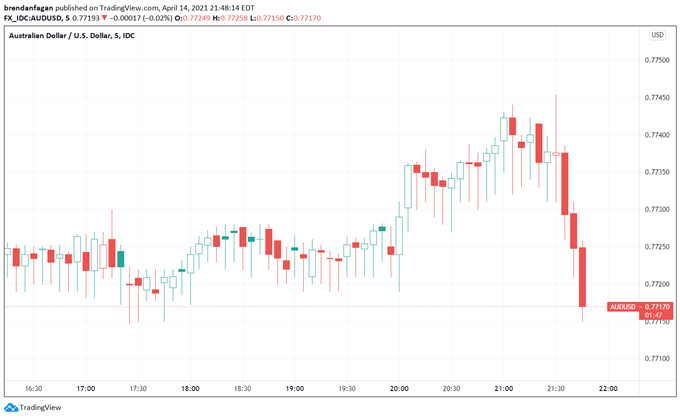 RBA Governor Phillip Lowe has also gone on record recently stating the RBA’s employment and inflation mandate will not be satisfied until 2024 at the earliest. March minutes from the RBA revealed an increased focus on inflation, with policymakers stating that wage growth would need to rise significantly from current levels in order to cause an uptick in inflation. Given the distance from its end goals, the RBA has reiterated that “very significant” monetary support is required for the foreseeable future.

How to Trade AUD/USD