Bitcoin prices tumbled lower overnight, falling as much as 15.7% to the lowest levels since March 26, before climbing back to finish just shy of 6% down on the day. The substantial sell-off appears to be linked to news that the US Treasury is opening an investigation into instances of money laundering carried out through the use of digital assets. However, this has yet to be confirmed or substantiated, with the Treasury’s Financial Crimes Enforcement Network (FinCEN) stating that it “does not comment on potential investigations, including on whether or not one exists”. 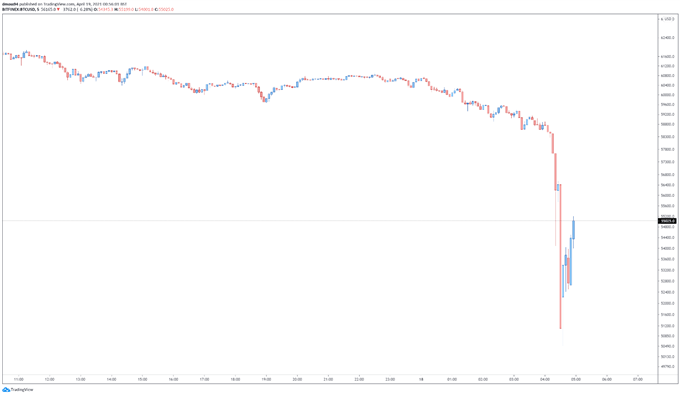 Nevertheless, the possibility of regulatory intervention in the crypto space could certainly have spooked investors and incited liquidation of exposed positions. A blackout in Xinjiang may also be behind the notable decline in the price of the heavily-traded cryptocurrency. The region is responsible for almost half of the Bitcoin mining network and was offline for 48 hours due to maintenance works at several power stations in mainland China.

This ultimately led to the Bitcoin hashrate declining dramatically, which may have in turn driven BTC prices lower, considering the Bitcoin hashrate is positively correlated to price. That being said, it is yet to be seen if this correction will garner follow-through given the recent public listing of Coinbase – one of the world’s most prominent crypto exchanges – and the adoption of digital assets by several well-known financial institutions and companies. 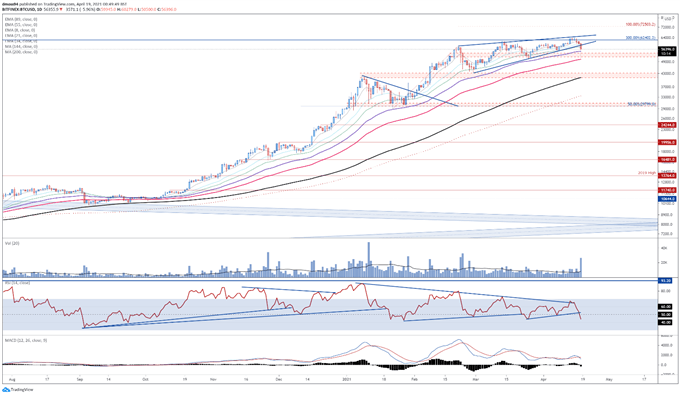 From a technical perspective, the outlook for BTC/USD appears relatively bearish, as prices break Rising Wedge support and plunge below all three short-term moving averages.

Above average volume in combination with the RSI plunging below its neutral midpoint, and a bearish crossover taking place on the MACD indicator, suggests that the path of least resistance is lower.

A daily close below 57,000 probably opens the door for sellers to drive BTC back to psychological support at 51,000. Breaching that could intensify selling pressure and propel the anti-fiat digital asset towards the sentiment-defining 144-EMA (41075).

However, if the trend-defining 55-EMA (55019) remains intact, a rebound back towards the yearly high (64829) is certainly not out of the question.

DOW JONES OUTLOOK: U.S. stocks plunge Wednesday after CDC confirms first case of Omicron variant in the country All major averages ended sharply lower, with the Dow Jones down 1.34% at the market close With […]