The technical outlook for the haven-associated Japanese Yen remains overtly bearish, after the funding currency toppled over 5.5% on average against its major counterparts in the first quarter of 2021. A continuation of this downside move seems in the cards through the coming months, as cycle analysis suggests a cyclical downturn is afoot for JPY.

Cyclical Downturn at Hand for the Japanese Yen

The chart above highlights the cyclical pattern displayed by the Japanese Yen over the past 37 years, with the currency largely adhering to what appears to be an 8-and-a-half year rotation. JPY set significant bottoms against its major counterparts in late 1998, early 2007 and late 2015.

After bottoming out, the haven-associated currency then seems to outperform early in the cycle, with key highs posted roughly two years after the 1998 and 2007 lows.

Although the Yen soared to its initial cyclical high just 13 months after the start of the period, the development of price over the last five years looks strikingly similar to the previous bullish cycle.

With that in mind, the convincing break below uptrend support extending from the December 2014 low – combined with the RSI snapping its 73-month uptrend and sliding to its lowest levels in six years – may foreshadow extended losses for JPY in the coming months.

Cycle analysis suggests that the currency could fall an additional 25% from current levels before bottoming out in early 2024. 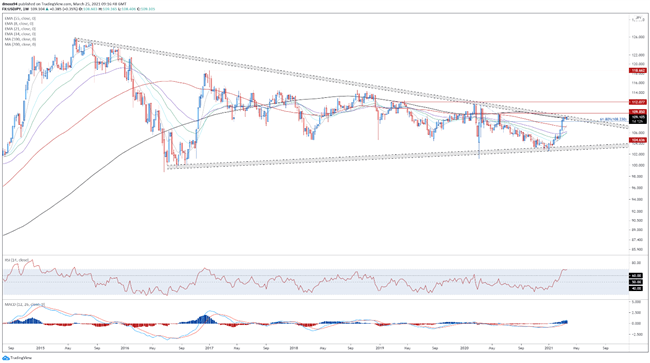 The USD/JPY exchange rate appears to be gearing up for an extended move higher, as price surges through the 61.8% Fibonacci retracement of the March 2020 to January 2021 downtrend, and careens towards confluent resistance at the sentiment-defining 200-MA (108.97) and Symmetrical Triangle downtrend.

With the RSI eyeing a push into overbought conditions for the first time since 2017, and the MACD registering its highest degree of positive divergence in four years, the path of least resistance seems skewed to the topside.

A weekly close above psychological resistance at 110.00 is required to validate a bullish break of Symmetrical Triangle consolidation and would probably open the door for the exchange rate to accelerate towards the 2019 high (112.40).

Hurdling that could pave the way for USD/JPY to begin probing the 114.00 handle. However, if triangle resistance remains intact, and prices slide back below the 61.8% Fibonacci (108.23), a pullback towards the trend-defining 55-EMA (106.26) could be on the cards.