Crude oil prices extended lower during Wednesday’s APAC trade after falling 1.56% a day ago. A Russian official said on Tuesday that US-Iran nuclear talks have made significant progress, sending oil prices sharply lower. Traders are worried about higher Iranian output if the two countries are moving closer to striking a deal. This may pave the way for removing some sanctions,including limiting Iran’s oil exports, imposed by the Trump administration.

Iranian crude oil exports have declined sharply since the US tightened sanctions in 2018, falling from over 2.2 million bpd to 0.088 million bpd in April 2021 (chart below). A full restoration of Iran’s output may add over 2 million bpd to global supply. This may disrupt a nuanced balance in the supply-demand relationship as OPEC+ moves towards lifting output caps to meet rising global demand.

Although challenges remain on the road to striking a nuclear deal, the appearance of constructive talks still spooked the oil market. WTI has surged over 36% this year, rendering it vulnerable to profit-taking near key chart resistance at $ 66.50. Lingering concerns about viral resurgence in some Asian economies, especially India, Japan and Taiwan, also cast a shadow over the outlook for energy demand.

Meanwhile, the American Petroleum Institute (API) reported a 0.620-million-barrel build in crude stockpiles for the week ending May 14th, compared to a forecasted increase of 1.68 million barrels. In the prior week, inventories declined by 2.53 million barrels, underscoring rising fuel demand as economic recovery gathers pace.

Looking ahead, core inflation figures from the UK, Europe and Canada dominate the economic data docket alongside the FOMC minutes. Traders are looking for clues about price levels and their implications for central banks’ monetary policy.

The Energy Information Administration (EIA) will report weekly inventories data later today. Markets anticipate a 2.00-million-barrel build in stockpiles. A larger-than-expected increase may serve to undermine crude oil prices, whereas a smaller one or a decline would likely do the reverse (chart below). 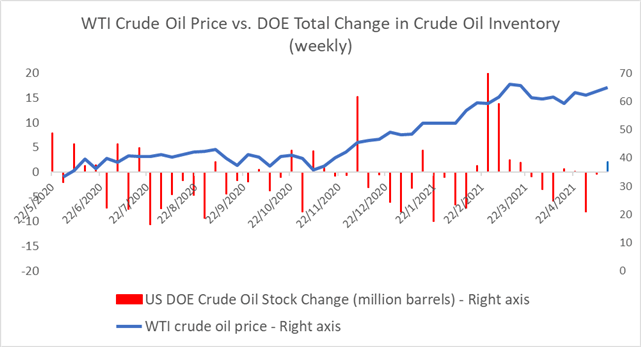 Technically, WTI failed to breach above a key resistance level at 66.50 (the 200% Fibonacci extension) for a second time this month. This may result in a “Double Top” chart pattern that is inherently bearish in nature. An immediate support level can be found at around $ 64.40 – the floor of the “Ascending Channel” as highlighted on the chart below.

Breaching below the “Ascending Channel” may signal a near-term trend-reversal and open the door for further losses with an eye on $ 62.19 (the 161.8% Fibonacci extension) for support. The MACD indicator has formed a bearish crossover, suggesting that near-term momentum is tilted to the downside. 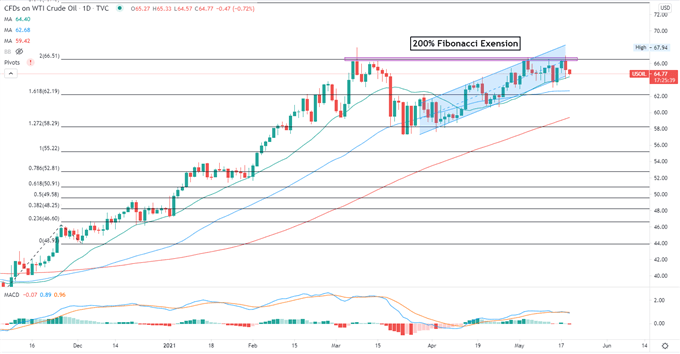