Financial markets received the first taste of a post-pandemic surprise surge in US inflation from Wednesday’s Consumer Price Index (CPI), and the impact saw a cascade of selling from equities to government bonds to precious metals. Gold was no exception, helped lower by a spirited climb from the US Dollar. The benchmark DXY index recorded the largest one-day rise in two weeks.

Treasury yields climbed in tandem with the Greenback, putting further overhead pressure on the yellow metal. Rates traders reacted with a more hawkish view on the Federal Reserve’s future policy stance following the strong inflation print. The supposition is that the Fed will be forced to tighten sooner than expected. That hypothesis may prove true, but only time will tell.

The case for an earlier tightening of monetary policy is only growing stronger despite unremitting Fed talk to the contrary. Fed Chair Jerome Powell, along with several other FOMC voters, have taken a strong stance arguing that any outsized rise in prices will be transitory. The central bank could, of course, be right. Still, is the Federal Reserve too entrenched in that view to react promptly?

If the Fed falls behind the curve on inflation, this is likely to derail the economic recovery. Gold is typically seen as an inflation hedge, but that does not necessarily mean that it stands to gain from higher price growth readings. Runaway inflation would likely force the Fed to taper stimulus, causing yields to rise and probably pulling the US Dollar along for the ride.

XAU/USD’s reaction to today’s hot CPI was a downside move.More of the same is likely in reaction to economic data that is seen as forcing the Fed’s hand. The end of this week is potentially key in this regard, with the DailyFX Economic Calendar showing US retail sales for April and the Michigan Consumer Sentiment survey results set to cross the wires. For the latter, traders may give a closer look to inflation expectations within the report than the catch-all headline gauge.

Gold is seeing a modest rebound from yesterday’s losses, with XAU/USD trading near the 1820 level. Wednesday’s selloff was initiated from a resistance trendline stemming from last August’s swing high. That barrier helps form a broader downward-sloping price channel, with support still some way to the downside.

The most likely area for resistance remains that trendline, although a breakout would focus on the recent 1845.44 swing high. On the other hand, the 23.6% Fibonacci retracement level at 1805.92 and the psychologically imposing 1,800 level will be eyed as support levels on the next downside move. Despite the small tick higher, MACD appears to be gearing up to cross below its signal line, which is a bearish sign. 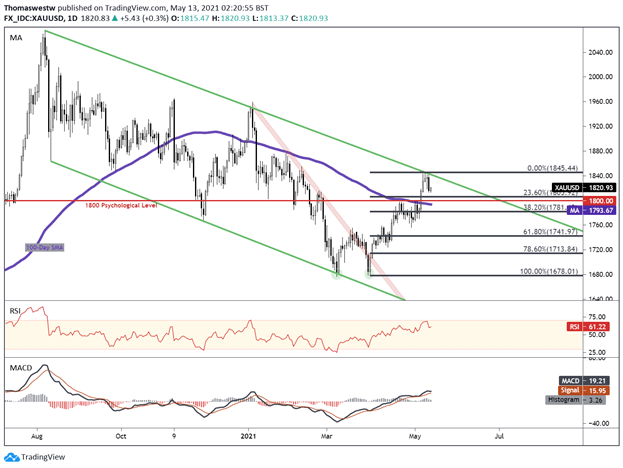