Bitcoin (BTC/USD) is back in positive territory on a week-on-week basis as it slowly recoups some of its recent losses. According to data from Coinmarketcap, Bitcoin is up 2.0% from this time last week, Ethereum is down around 6.5%, while the alt-coin market shows losses on either side of 10%. The move higher by Bitcoin, if sustained, will eventually filter down to the rest of the market, although the recent highs seen in these coins will take a sustained push if they are to be seen again. The dramatic outperformance of the rest of the market over Bitcoin from the start of the year – alt-coin season – is not expected to happen again in the short term.

A to Z Crypto: Demystifying the Top Cryptocurrency Jargon

We looked at Bitcoin yesterday and the positive sentiment we noted from Tuesday’s bullish hammer formation remains in place. Tough resistance between $42,000 and $43,500 will continue to weigh on any further rally, and while Bitcoin’s volatility remains high, it may well be that the current, slow pullback continues until this resistance zone nears. 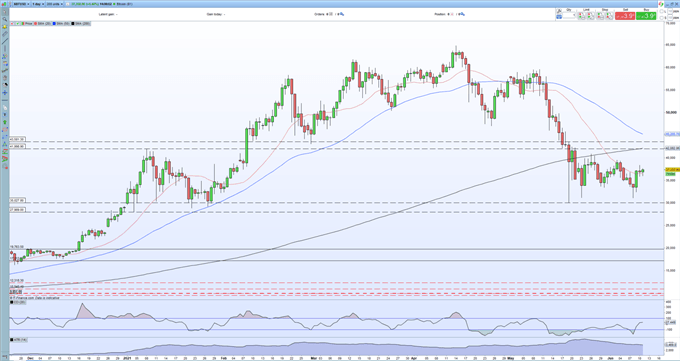 Ethereum remains in a short-term downtrend dictated by the 20-day simple moving average. The spot price opened below this short-dated moving average and Ethereum needs to reclaim this in order to push higher. Ethereum’s recent underperformance against Bitcoin – the ETH/BTC spread has dropped from a multi-year high of 815 to 661 – will take time to recover and will likely be based on price moves in Bitcoin more than Ethereum price action over the short-term. The May 30 swing-low at $2,180 should act as the first line of support. 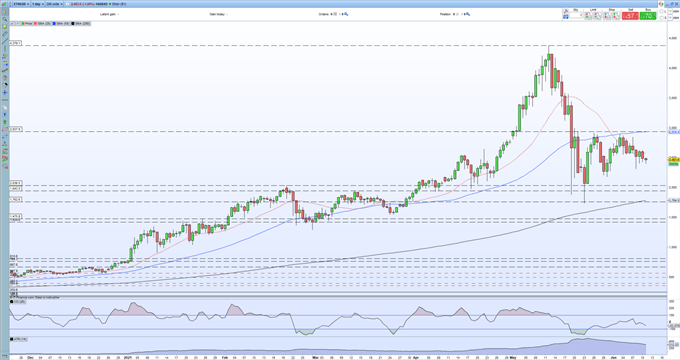 What are your views on Bitcoin (BTC),Ethereum (ETH) – bullish or bearish?? You can let us know via the form at the end of this piece or you can contact the author via Twitter @nickcawley1.