Crude oil prices pulled back slightly during the Asia-Pacific mid-day session, pausing a five-day winning streak as profit-taking kicked in. WTI is hovering below a psychological resistance level at $70.00 and may be hesitant to breach it. Market participants are trying to strike a balance between rising demand from the world’s largest economies and potentially higher output from Iran as well as new Covid-19 outbreaks in the Asia-Pacific region.

Friday’s US nonfarm payroll data underscored a robust recovery in the labor market, with wage growth hitting 2% yoy and the unemployment rate falling to 5.8%. Some 599k jobs were created in May, compared to 278k in the prior month. The energy market may tighten up even further with the summer driving season bolstering demand for fuel.

Across the Pacific, China’s Guangdong province is facing a new wave of Covid-19 infections. Local authorities have tightened controls to curb the spread of the virus, encouraging residents to limit travel. This may cast a shadow over the outlook for energy demand in the world’s second-largest economy. Guangdong is China’s most prominent manufacturing and technology hub, contributing to around 12% of the country’s GDP.

Looking ahead, traders will eye this week’s API and EIA crude oil reports for clues about the supply-demand relationship. The EIA reported a larger-than-expected draw in stockpiles last week, reflecting a rapid rise in demand as the economy rebounds.

Meanwhile, nuclear talks between Iran and world powers will resume on June 10th. Given the fact that Iran’s presidential election will take place on 18th, the window for a deal to be struck remains tight. Yet, the ongoing nuclear talks may pave the way to remove export restrictions on the Middle Eastern country and potentially lead to as much as 2 million bpd of additional supply on the global market.

Technically, WTI breached above a key resistance level at 66.50 (the 200% Fibonacci extension) last week and thus opened the door for further upside potential. Prices seems to be facing strong selling pressure at around the $70.00 mark, which may be viewed as an immediate resistance. The overall trend remains bullish-biased as suggested by the upward sloped SMA lines and rising MACD oscillator. 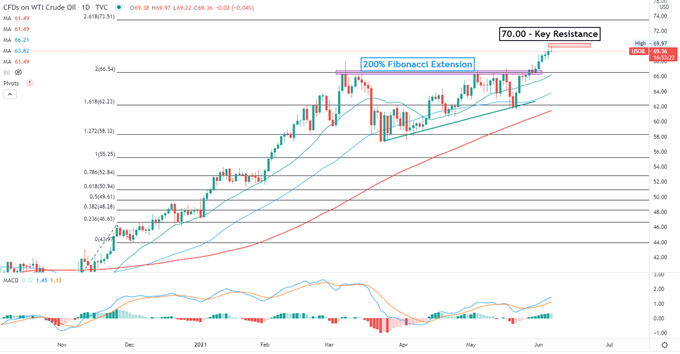