Crude oil prices extended lower during Thursday’s APAC session after hitting a two-and-half year high of $72.44 this week. The pullback may be attributed to a stronger US Dollar following the June FOMC meeting, in which Fed officials started to discuss scaling back asset purchases and signaled two interest rate hikes by the end of 2023. The meeting outcome appeared to be more hawkish than markets had anticipated, resulting in a significant surge in the US Dollar and Treasury yields. A stronger Greenback exerted downward pressure on USD-denominated commodities, such as gold, silver and crude oil.

Oil’s upward trajectoryremains intact despite near-term pressure from a stronger USD however. This is because the commodity is supported by a brighter economic outlook as progress on vaccinations in the US and Europe eased the pandemic’s impact. The Fed also painted a rosy picture of the economic recovery, revising up this year’s US GDP growth rate forecast to 7.0% from March’s 6.5% projection. The central bank also highlighted that “indicators of economic activity and employment have strengthened”, underscoring a rapid recovery that may lend support to fuel demand.

The Energy Information Administration (EIA) reported a 7.35-million-barrel draw in crude inventories for the week ending June 11th – the largest decline seen in six weeks. This also marked the fourth consecutive weekly decline in stockpiles, hinting at tightened market conditions as refiners geared up capacity to meet demand for the summer driving season (chart below). Total motor gasoline stockpiles rose 2 million barrels for the week, compared to a 7-million-barrel jump seen in the prior week.

Oil prices have more than doubled since November, propelled by the global economic recovery and vaccine rollouts. OPEC+ have recently upgraded the outlook for global energy demand for the second half of the year, preparing to gradually ease production curbs to meet rising fuel needs. The favorable macro background may pave the way for oil prices to extend higher despite near-term volatility.

Technically, WTI is eyeing a key resistance level of $73.5 (268.2% Fibonacci extension) after reaching a two-and-half year high this week. The overall trend remains bullish-biased, albeit a minor pullback appears to be underway. An immediate support level can be found at $70.0 – the previous resistance. The MACD indicator is flattening, suggesting that upward momentum may be fading. The RSI oscillator extended above the overbought threshold of 70, flagging the risk of a technical pullback. 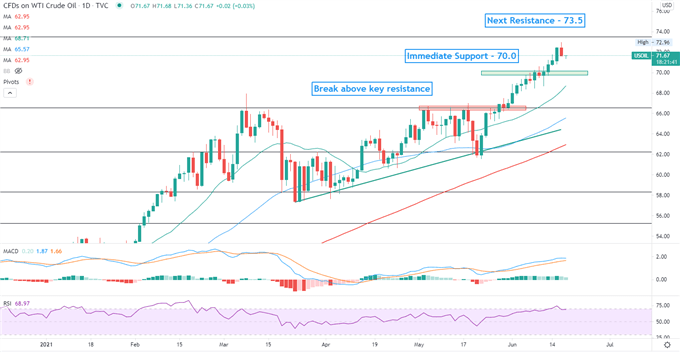