Another down week for the Australian Dollar has left the currency near its worst position since December 2020 versus the Greenback. The Aussie Dollar recorded a second consecutive week of broad losses against its major peer currencies, with AUD/USD, AUD/NZD, and AUD/JPY falling 0.52%, 0.16%, and 1.37%, respectively. Prices recovered marginally on Friday, along with government bond yields, but will the slide continue next week? The prevailing headwinds suggest the late-week recovery may not continue.

A wave of Covid infections has swept through Australia, forcing policy makers to enact some of the toughest social-distancing restrictions seen this year. Sydney — the largest city in the county, with a population of over five million – is entering the final week of a three-week lockdown. However, given the deteriorating conditions, that lockdown looks like it may be extended. The city saw 44 new cases on Friday.

Adding to the nation’s woes is the fact that only a little over 10% of the population is fully vaccinated, leaving few options outside economically crippling lockdowns. Saturday morning, New South Wales (NSW) Premier Gladys Berejiklian signaled that current restrictions are likely to remain in place beyond the scheduled deadline next Friday. The state leader said:

“Unless there’s a dramatic turnaround in the numbers, I can’t see how we’ll be in a position to ease restrictions by next Friday”

The wave of infections has put a dark cloud over the economic outlook, causing bond traders to scale back rate hike bets for the Reserve Bank of Australia (RBA). Viewing the domestic government bond market and the Australian Dollar’s recent movement together highlights the change in calculus for those bets. The 10-year yield dropped 7.8% over the past week, which dragged on the Australian Dollar. Prices did retrace a portion of losses on Friday as yields moderated.

Looking at recent monetary policy actions, the July RBA rate decision last week signaled a potential step towards hiking rates when the central bank elected to keep the April-2024 bond for its 3-year yield target of 0.10% and announced a reduction in the next round of quantitative easing, scaling back to a pace of A$4 billion per week. The moves and language in the statement suggest the RBA may be preparing to shift its timeline up for a possible hike in 2023. 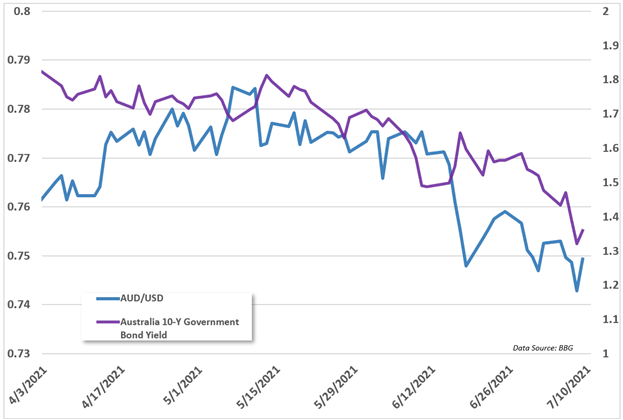 Nevertheless, markets remained unconvinced outside the immediate reaction, which saw the Australian Dollar strengthen. The RBA Governor, Philip Lowe, also appeared to temper expectations later in the week by restating, “the condition for an increase in the cash rate depends upon the data, not the date; it is based on inflation outcomes, not the calendar.”

The implied rate via cash rate futures fell slightly. Overall, the near-term path for the Australian Dollar appears skewed to the downside, with heavy influence given to the lockdowns and increasing social-distancing measures being put in place. A pickup in vaccination rates may help counter those downside risks, but ramping up the rate to where it would slow the spread of infections is still a ways off.

Traders will be keenly focused on several potentially hard-hitting economic data prints, along with keeping a close eye on new virus cases and government measures. The July Westpac consumer confidence index will cross the wires, followed later in the week by the June employment report. According to the DailyFX Economic Calendar, analysts expect a gain of 30k jobs, down from 115.2k the prior month. Theemployment report is likely to be a market mover, as a better-than-expected print may revamp rate bets.

Economic Events to Watch for AUD