The cryptocurrency market is a sea of green going into the weekend with Bitcoin nearing $41k, Ethereum eyeing $2.8k, and a raft of alt-coins showing high single-digit gains today. The small sell-off early in the week has been reversed and the market outlook remains positive, despite the proposed cryptocurrency proposals currently being debated in the US Infrastructure Bill. The latest proposal would see Proof-of-Work projects exempt from customer tax reporting, while the DeFi sector would be liable for onerous tax reporting obligations. Much can change over the weekend, but as we stand the market continues to push ahead regardless.

Bitcoin is again probing a cluster of prior highs all the way back up to the $43.5k level after springing off prior resistance/now support around $37k. The 20-day simple moving average has pushed above the 50-dsma, highlighting the current bout of positive sentiment, while BTC is no longer in overbought territory.

The Ethereum ‘London’ upgrade was completed on Thursday without incident, nudging the spot price higher, while the convincing breakout of the recent range around $2,500 has enabled ETH to move ever higher. As with Bitcoin, a cluster of prior highs all the way back to $3,000 may slow the next move higher, but current sentiment remains positive and any pullbacks are likely to be fleeting. 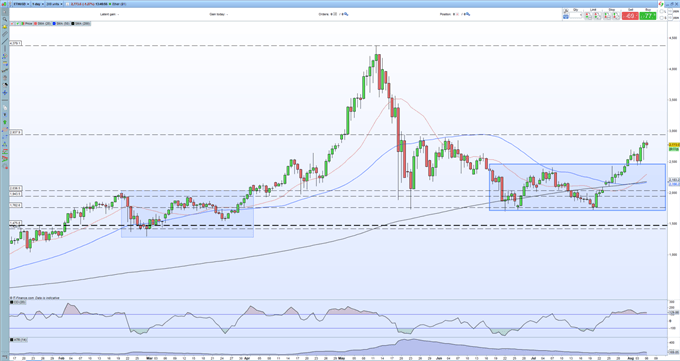 The Ethereum/Bitcoin spread finally broke through trend resistance at the beginning of the week and the spread moved sharply higher before falling back late Thursday. Looking at the chart it is likely that the spread will move higher but a period of consolidation may be needed, especially with the Infrastructure Bill discussions going on. The trade does look overbought in the short-term, using the CCI indicator, while a positive case can be made from the 20-dsma moving higher through the 50-dsma. 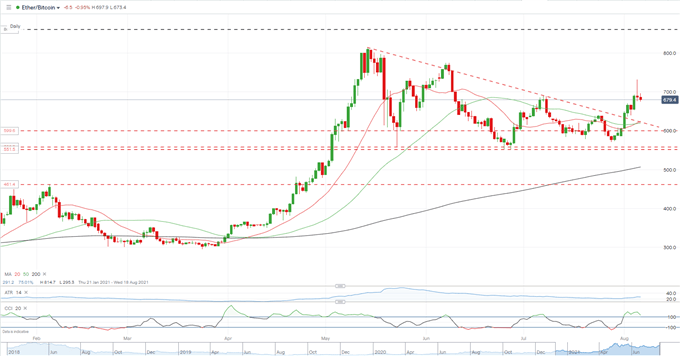 What is your view on Bitcoin and Ethereum – bullish or bearish?? You can let us know via the form at the end of this piece or you can contact the author via Twitter @nickcawley1.