Update August 5: Apple Inc (NASDAQ: AAPL) is trading above $147 early on Thursday, rising by a minor 0.1%. Despite the small increase, shares of the Cupertino-based tech giant seem to maintain a safe distance from the all-important double-top of $150. The iPhone maker is sensitive to potential changes in the Fed’s bond-buying scheme and interest rate hikes. Moreover, China’s techlash may also hurt Apple, even if it is currently directed at Chinese firms. See a full explanation of the double-top below.

Apple stock pout in a pretty solid day on Tuesday closing up 1.3% at $147.36. The markets were a little shaky early on with big tech FAANG names all suffering but the market rallied as the day wore on.

The S&P 500 closed more or less on the high of the day as investors continue to be backed by the Fed and ignore some worrying economic developments. Apple took its cue from the turnaround and flipped from red to green. In the process, it has still failed to trigger the double top at $150 it set up after results being released last week. Just as a primer on technical analysis 101, a double top is a powerful bearish signal but it has a trigger. The market sets a top, comes back down, and then sets the same double top and retraces again. However, the trigger is not until the market breaches the first retracement level. Apple has yet to do this so our double top is still in the formative stage. There is the possibility that it will not trigger although the risk-reward still favours it, read on to see why.

Apple had a strong run higher into results, meaning that even a 30% beat on the bottom line (earnings per share) has not seen follow-on buyers push the stock much higher. This is the same scenario that played out ahead of the last results when again AAPL stock pushed higher in advance of the results, peaking at $137 just afterward before sliding to the low $120s in the weeks that followed.

Apple stock (AAPL) had a little pop just on the release of the numbers, but this swiftly turned around and the stock fell about 1%. Part of the reason for the lackluster reaction may have been some bearish comments on the earnings conference call. Apple mentioned supply constraints for the iPhone and iPad in Q4 and also guided growth to be lower going forward. It was a strong earnings beat, but the relatively downcast comments created some future uncertainty.

So, as mentioned, Apple stock has yet to trigger the double top and set off a strong bearish indicator. The retracement from the first topping out at $150, is at $141.67, and this is the key trigger from the double top and, once broken, puts the risk-reward even more tilted toward bears. Until then, Apple has the possibility to push higher with $150 the resistance needed to break.

However, we also have some other bearish signals to consider. The Relative Strength Index (RSI) is trending lower while the price has been trending higher. This is known as a bearish divergence and has confirmation from the Moving Average Convergence Divergence (MACD) doing exactly the same trhing.

So, the risk-reward is skewed to the downside with those negative comments on the conference call and the technical factors mentioned above. The key is to break $141.67. This is then an area of low volume with little support so a move to $135 should quickly follow. 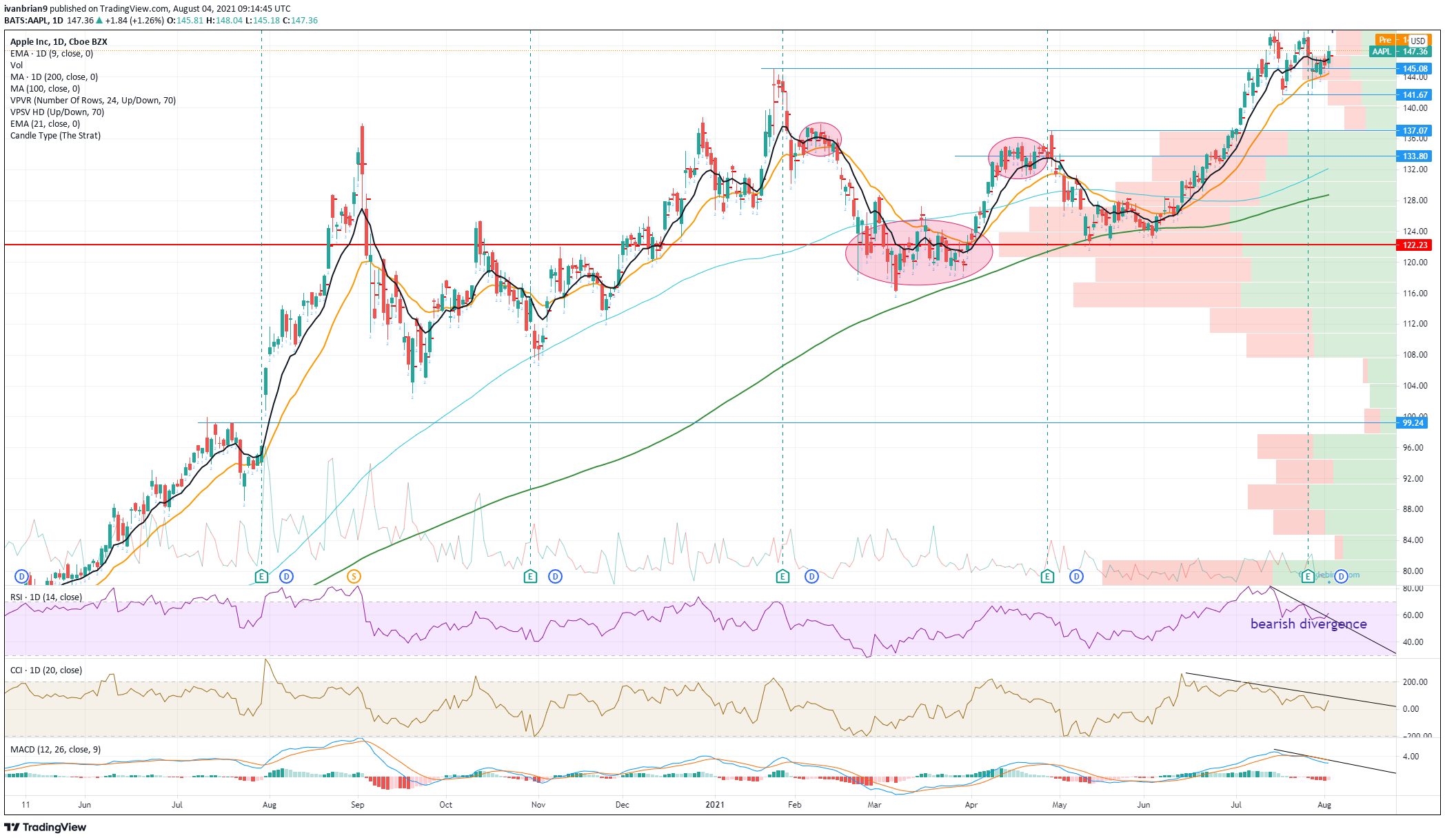