The Central Bank of Russia decided to hike the key rate by 100 basis points, in line with expectations. The Bank added that should the situation develop in line with its baseline prediction, the bank of Russia would consider future rate hikes and sees the range key rate range somewhere between 9 and 11 percent.

Chart Showing Changes in the Key Rate Over Time

It’s not every day that the Central Bank of Russian (CBoR) is thrust into the lime light but given the recent focus on the region amid escalations surrounding Ukraine, the key rate decision is likely to garner more attention than usual.

The CBoR actually began hiking interest rates in March of last year already after dropping rates to a low of 4.25%. Just like in other parts of the world, Russia has been experiencing levels of inflation well above the 4% target. Latest inflation figures sit at 8.73% while the CBoR policy rate stood at 8.5% before the meeting.

This month’s meeting comes with the central bank forecast which is likely to inform market expectations and possible market movement as an additional 100 basis point hike was largely priced in. Further to this, the central bank could also shed light on the possible resumption of foreign exchange purchases after halting them on the 24th of January.

USD/RUB witnessed moves consistent with the build up to the announcement and as mentioned before, the hike had been largely priced in. 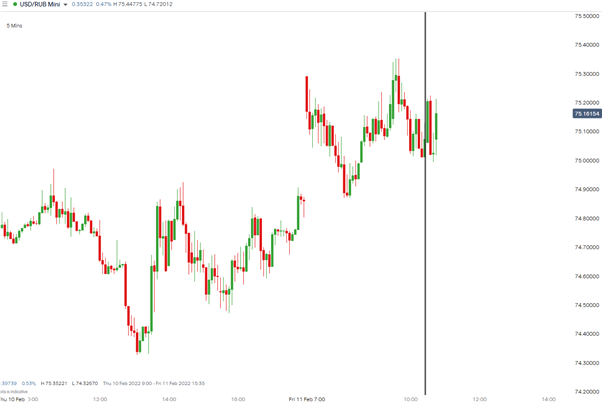