Unemployment in the Eurozone dropped more than expected as it reached 6.8%. The labor market has strengthened for some time now and prints well below the historical average which is around 9%. Much of the labor market strength can be attributed to the ECB’s ultra-loose monetary policy via sub-zero interest rates and by providing economic stimulus via the Pandemic Emergency Purchas Program (PEPP).

However, rampant inflation has ensued, mainly due to soaring energy prices, which has shown up in the latest PMI data. Producer prices are up year on year by 30.6%, and 5.2% (double the estimate) month on month. Oil and gas prices rose 11.6% for the month and a whopping 85.6% over the year ending January 2022.

The ECB now has to contend with rising inflation amidst potentially negative economic impacts of the Ukraine crisis, particularly due to the fact that Russia supplies a sizeable amount of gas to the single market.

EUR/USD has declined steadily ever since the post ECB meeting at the end of January which the markets viewed as rather hawkish. The steady drop gained pace over the last three sessions as expectations around a possible rate hike in 2022 was revised downwards. Previously we saw expectations of around 40 basis points with of hiking but currently only 27 bps expected before year end.

Yesterday the pair broke below the recent low of 1.1121 and early price action in the London session sees EUR/USD well below that level once again. The safe-haven appeal of the U.S. dollar is doing no favors for the pair, driving it lower, towards the zone of support at 1.1020 and the psychological level of 1.1000.

The MACD indicator shows no signs of fatigue however, the RSI approaches oversold territory which may delay the move lower should the pair become oversold. Resistance appears at the prior low of 1.1121 before the June 2020 low of 1.1168 can be considered. 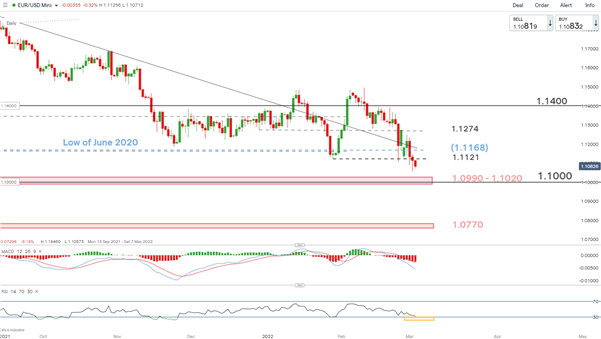 After already receiving the unemployment and PMI figures, the ECB monetary policy meeting minutes become available. The January meeting was received by the market as rather hawkish for the ECB as a rate hike before year end was not ruled out amidst rising inflation numbers. Thereafter, we have initial jobless claims in the US which is due to print inline with recent numbers before Fed Chair Powell is due to speak once more.

Yesterday, Powell testified that he is in favor of a 25 basis point hike ahead of this month’s crucial FOMC meeting where it is all but certain that we will see the first rate hike in the US since the pandemic. At the same time, US services PMI data for January is due. On Friday, EU retail sales and US NFP and unemployment data rounds up the week.